Shuffa Brick is a new physics based Break-out style game, except you do not use a paddle to hit the ball. You touch the screen slide then release.

Clear all bricks to complete the level.

Shuffa Brick can be played with just the touch of one finger.
You touch the screen of your phone or tablet, slide back and release.
This will rebound the ball in the opposite direction.

See how you rank on Google play leader board.
Unlock all achievements.

One level only included, let me know if you want me to create more.

Posted by Unknown at 4:51 PM No comments:

In the new game I'm writing, Shuffa Brick, I had each level start with all bricks already in place, functional but a bit dull to look at. After watching another great YouTube video on Juicy game design, I decided to add a bunch of the juicy effects described in the video.

Juice it or lose it

Animate the bricks coming onto the screen

In the video I saw they used an animation curve to provide the location that the brick should be. So given a ratio of time along the x axis, this will give you a ratio along the y axis for how far it is from the destination, the cool thing is that this can be further than the destination as in my example below, so it gives a little bounce effect. 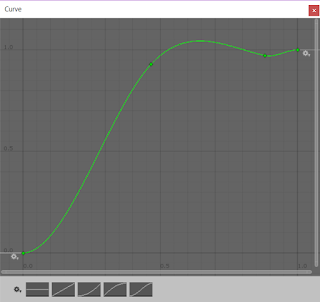 If we want the total journey time to be 1 second then after 0.25 secs in according to the curve we will have traveled 50% of the way to the final destination (calling curve.Evaluate(timeGap) would return 0.5 for the y axis value).

Fancy particle effect on the ball

Next thing I added was a particle effect on the ball, the idea is that it leaves a flame like trail behind the ball.
To do this I changed the Color over lifetime going from yellowy to orangish color with a alpha fade. 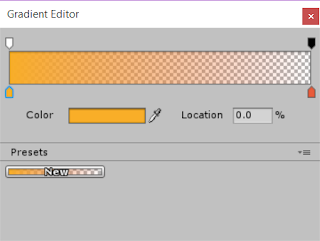 Explosion effect on the brick

Then an explosion effect when a brick gets destroyed. This is another particle effect to do this I set the same color over lifetime as the ball. I add speed and a gravity modifier to give it the effect. 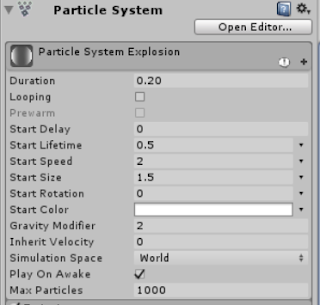 Posted by Unknown at 1:01 PM No comments: