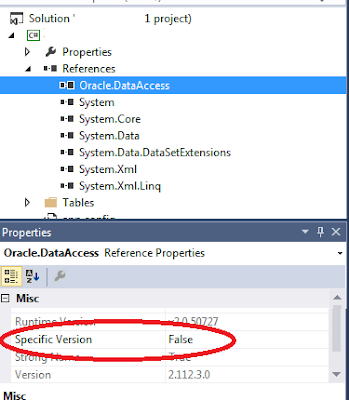 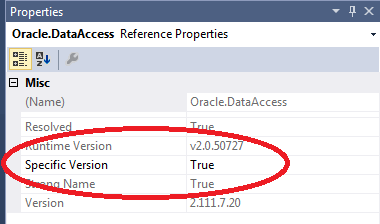 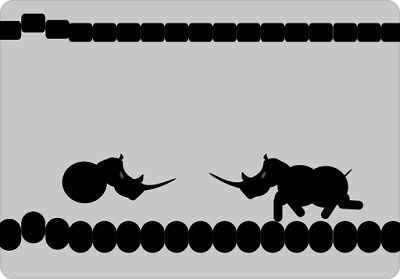 So looking around in the Unity physics 2D I thought I'd start with the ball. In Shuffa ball I have a script for the ball, a RigidBody2D and a circle collider 2D so I added the same. 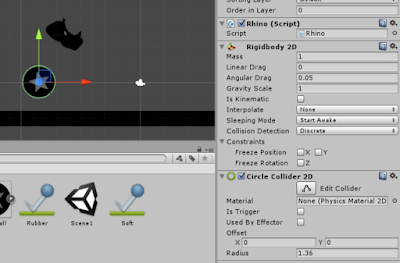 Then in the script I add code to apply force to the rigidBody2D. This little snipit says if the velocity is less than 5 add I to the force, by putting it in the fixedUpdate as opposed to every frame it does it at a fixed time. If every frame, different machines have different frame rates. 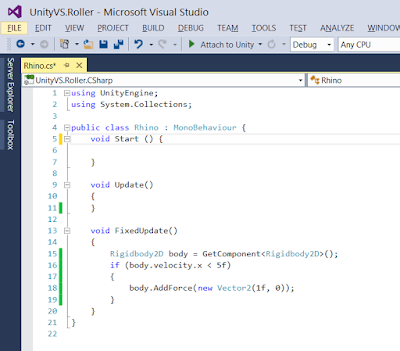 Rhino script in VS2013 Community edition

Running the scene, everything worked as normal, then I wanted to add the Rhino head, this is where I went looking through various Physics 2D components.

The thing that seemed most obvious to me was the Wheel Join 2D, this seemed what I wanted. I connected my wheel joint 2D from the wheel to the head of my rhino, which seemed the obvious way but it really didn't work as I expected.
Then I found on the internet that you connect from the head to the the wheel, that was better but again didn't look right. So I added a small wheel at the front of the head. Then for movement you have a motor not the FixedUpdate function above.

It was OK but not the vision I had for my Rhino ball, it was more like a Rhino bike than a Rhino ball.

Click here to see a video of the Rhino motor bike in action. 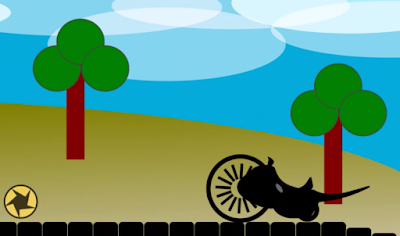 Next I tried the Spring Join 2D, this is like car suspension. Added two to the head and then I stopped the head from rotating on the Z axis. This gave more of the effect I was after. 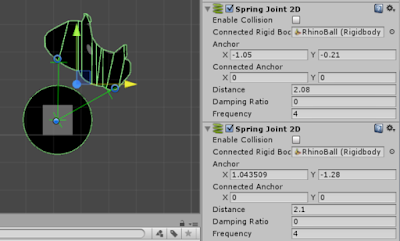 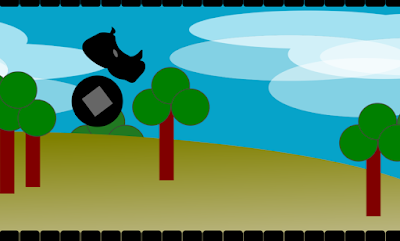 Click here to see a video of the Rhino Hopper

Posted by Unknown at 8:45 PM No comments: 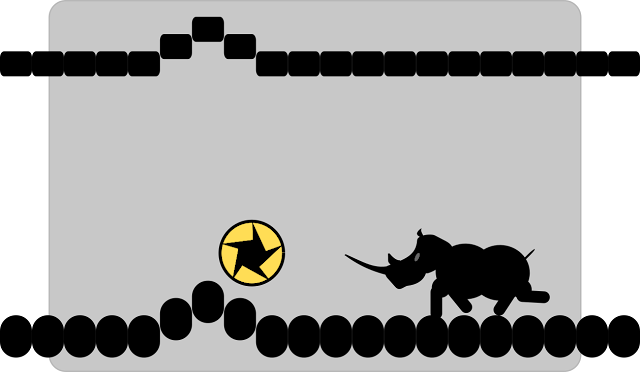 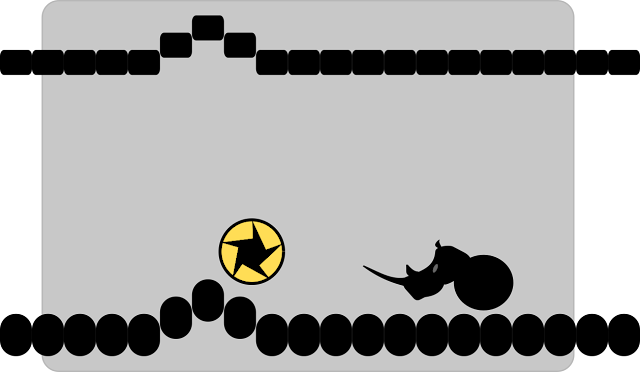 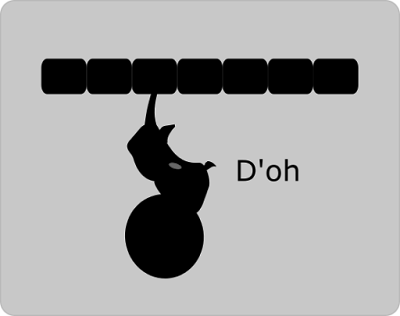 The rhino ball has the advantage of being easy to animate with less moving parts, but the 4 legged fire marshall could be more dramatic.
Posted by Unknown at 11:27 PM No comments:

In this blog I will go through how I easily created the background tiles for my game Shuffa ball:Endless roller. In playing about with Inkscapes layers I came up with this idea for exporting multiple backgound tiles with no need to line things up.


In unity it seems to me 100px is 1 unit in unity, so I created a rectangle 400px by 1000px, the colour is not important as the rectangles will be below what we want to export later and therefore won't be seen.

Exporting the rectangle now calling it 1.PNG, this will allow all others to have the same name which will make changing the names of the others easier later.

Next we will create duplicates of this rectangle; with the rectangle selected press CTRL+D to duplicate, do this several times. All of the rectangles are in the same place, we want them side by side so we use the Remove Overlaps in the Align and Distribute tab (Ctrl+Shift+A). 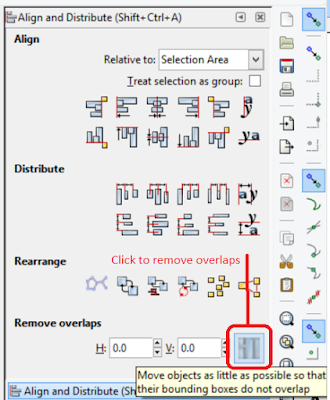 So left drag over the rectangles which will select them all then press the Remove Overlaps button.
This should expand to look like below with all aligned with no overlap.

Click on each rectangle and click export PNG, change the name from 2->8.PNG then export them. We do this now as later on we will be batch exporting the 8 tiles and it makes it easier.

The next thing we do is add the actual image we want to export so add a new layer (Ctrl+Shift+L).
Call this layer Background, whatever we draw in this level is what we want to be exported.
Rename Layer 1 as tiles.

After finishing the drawing on the background layer, we want to hide this level. To do that click on the little eye icon in Layers tab which will hide the background level.

Then when you click again on the eye on the background level, you will see your background drawing with the tiles selected underneath.

The next stage is to batch export the selected objects. Make sure "Hide all except selected" is NOT selected. If you did that you will get the grey rectangles exported. 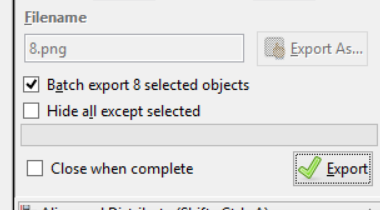 Click the export and we should see 1->8.PNG exported.

You can see these background tiles in action by visiting my Game Jolt page that has a playable demo,
or look at this video.

Posted by Unknown at 1:54 PM No comments: 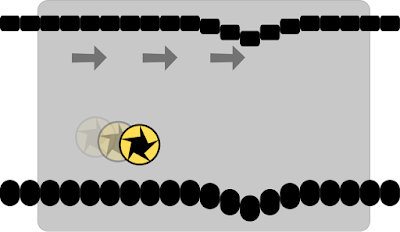 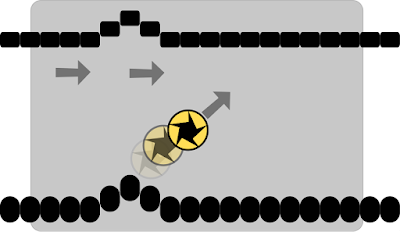 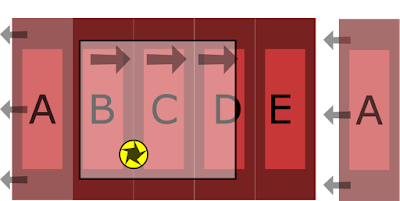 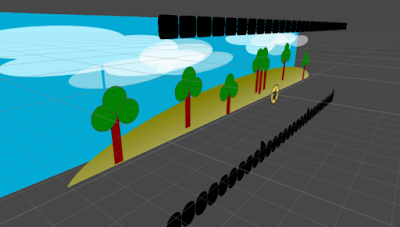