To the Rhino sprite I want to add 3 things. 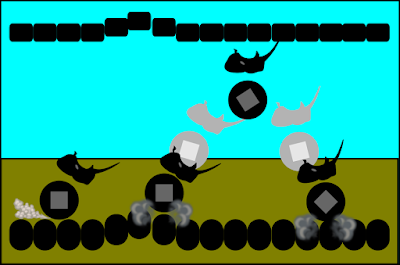 Rhino Revving, taking off and landing

This blog will be about adding the revving sprite to the Rhino ball.

Again I’m going to use Spriter by BrashMonkey, and the Dust.scml from the Game effects artpack.

It has 2 animations the Rev sprite and the landing sprite, I’ll export them to separate PNG files like I did previously. Then drag them onto the hierarchy to create the animation.

If we were to attach to the wheel as a child the rev sprite would rotate with the ball. We could attach the sprite to the Rhino head as that is doesn’t move much but as with the flame sprite I’m going to use the Update function to position relative to the centre of the ball.
Unlike the flame sprite we need to apply an offset as the rev needs to appear on the left of the Rhino ball. To find the offset make the Rev temporarily a child of the Rhino ball then move to the ideal position, store the transform position as this is what we’ll add in the Update function. Remembering to move the Dust_000 from the RhinoBall hierarchy.

adjusting the transform of the Rev sprite

adding the sprite to the Rhino script

So the Rev sprite now works and is well positioned but the problem is when the Rhino jumps and is airborne there shouldn’t be dust revving. So as with the flame in the previous blog we will RayCast down from the centre of the ball to see when we lose contact with the ground.
If we lose contact we set active of the Rev GameObject to false, in the future we will transition from the Rev sprite to the take-off sprite but this will do just now.